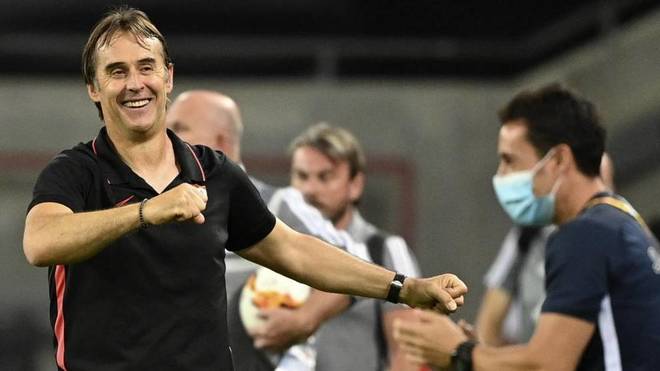 Lopetegui: When you get to a final, you want to win it

Following a 2-1 victory over Manchester United in the Europa League semi-final, Sevilla coach Julen Lopetegui has all eyes on the final.

The result means a record sixth final in the competition for Sevilla, who have never been beaten once making it to the last four.

«We’ve done it and now we have to rest, once you get to a final you want to win it,» Lopetegui said joyously.

«We hugged in joy, we know everything this team has been through, today included and we have that resilience to grow against intensity.»

He also praised Manchester United, who provided a difficult opponent to beat.

«It was a game of resilience, of being able to compete to the limit as we always do,» Lopetegui explained.

«Manchester United were the best team in England after the return following quarantine, they have an extraordinary future ahead.

«There are few teams with the midfield play of Manchester United, in the first half we could control it and at the start of the second half we didn’t but Bono was fantastic.

«After that we balanced things out and had chances to do them damage.»

The former Real Madrid coach also shared his joy about the success of his team.

«I’m happy for the boys, the fans, it’s difficult to find a group like this one and they deserve this reward,» Lopetegui said.

Sevilla will face either Shakhtar Donetsk or Inter in the final, due to take place on Friday August 21 in Germany.